Icons and Cities - about the amazing icons of Nimat Badawi

The iconoclastic regime dissolved between 726 and 843, after the death of Justinian. Despite heated disputes between various monastic groups, art has still found ways to dig its way through conflicting clerical visions and impose its own rigors. Mosaics became very common in that early period of the fourth century when Byzantine artists came to outline a distinct prescribed style.

Although each medieval school imposed its own canons of representation, iconographic art was not as canonical as it was intended, it evolved from one century to another and from one culture to another, following the natural path of social transformations and connecting faith and its symbolic elements with everyday life.

According to Erwin Panofsky, iconology seeks to reveal the underlying principles that form the basic attitude of a nation, a period, a class, a religious or philosophical perspective, which is modulated by a personality and condensed into the work of a single artist. 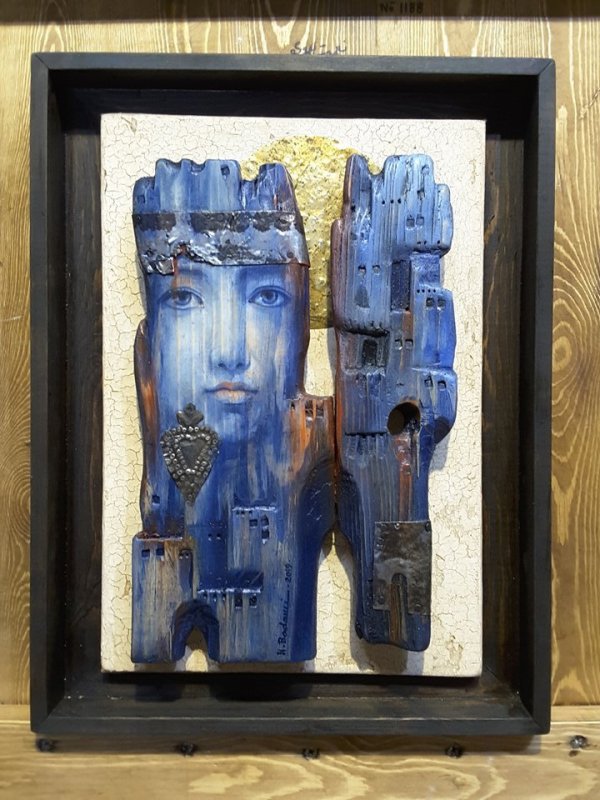 It's hard to imagine what it's like to see the streets of your youth destroyed, the houses you passed by, dozens of times, in ruins, what it's like to find yourself in a few months in a decomposed world, to have to live among the wrecks of what once was your reality. Syrian artist Nimat Badawi tries to capture, in his icons, images of the captive soul, imprisoned, suspended in the interstitial spaces between times and between the layers of inaccessible or unbearable realities. The soul is, to a large extent, memory, both individual and collective. This need to create icons is inborn. Mircea Eliade often used the notion of consecration for the processes of affective memory. The particle "con" caught my attention. Icons are links, they are bridges, windows. They do not encode as much as they carry a "breath" from one dimension to another, they do so by sensitive suggestion, not discursive, they communicate exactly what no text, so no confession can contain.

The icon consecrates knots of the connection between the soul and the world or between individual souls or between them and what they only dreamed and hoped and craved for. The icon puts the soul in the center of the world, engages the flesh with the soul. The body in love is one "of grace". In the icons, the body is always the one touched by grace. 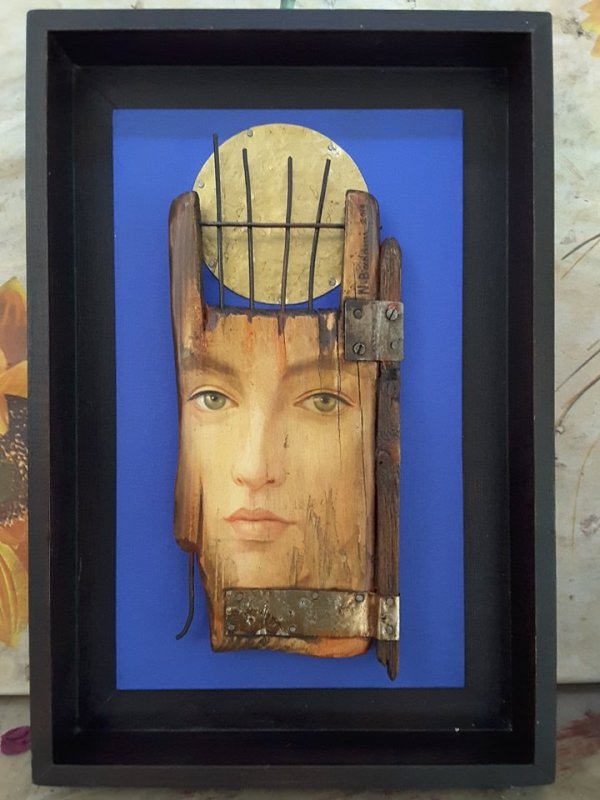 Initiated in Rome in Byzantine art, Nimat Badawi preserves in style a part of the essentialism of representations, of lines' purity and of the symbolism specific to classical iconography, but his works capture the innocent faces of ordinary people, children or women. Their portraits are painted on pieces of wood found among the rubble to which they add, in a heterogeneous composition, other fragments of objects destroyed during the bombings in Aleppo. Pavel Florenski says that the iconostasis is meant to reveal, to reveal the Kingdom of Heaven and to make it present, he sees in it a "door to the Kingdom". In the icons of the Syrian artist, however, the characters seem to be prisoners, caught beyond the "bars", only the angelic beauty and the serenity of the faces suggest an area of contact with the celestial ones. But the compositions suggest that they could not communicate or project anything, they are faces that express a frozen beauty, themselves collapsed in inner worlds.

Every icon is a bridge and a path of hope. We need to shape icons, as we would throw some anchors in the mists of becoming, so that we do not feel completely lost, whether they are carved in wood or (I would add) in the blood. 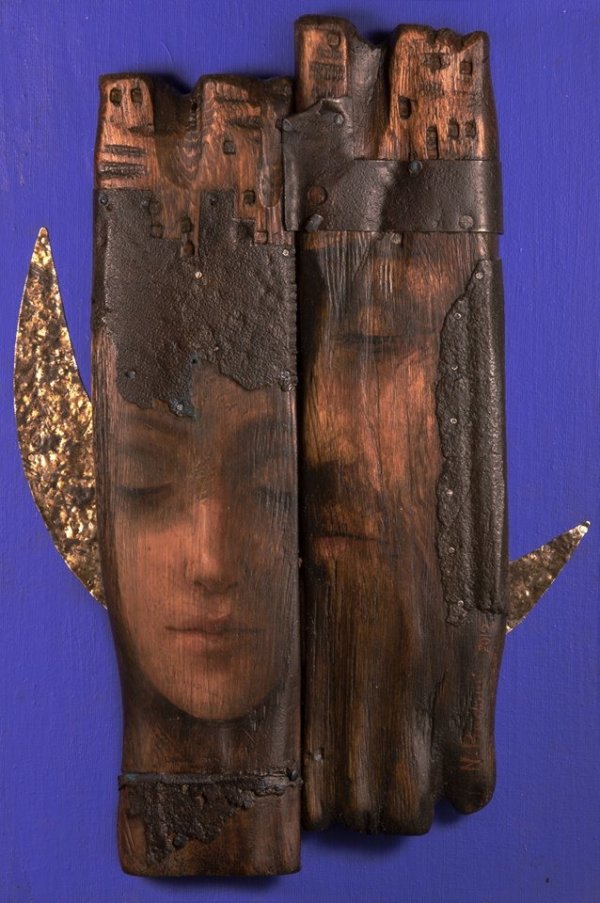 The crenellations carved in the wood of the icons are allegorical images of the ancient medieval fortress of Aleppo, a symbol of the city, dating from the Ayyubid period.

But the hill on which it rises has been a place of worship since the 3rd millennium BC. The recently discovered temple of the ancient storm god Hadad dates back to that, as recorded in the cuneiform texts of Ebla and Mari.

The fortress was constantly attacked and partially damaged. It was conquered by Amir Timur in the 1401 invasion.

During the clashes with the Persian king Khosrau Parviz in the seventh century, it is said that the people of Aleppo took refuge in the Citadel because the city wall was weakened. Currently, very few remains from the Byzantine period have been found on the Citadel Hill, although it is known that the two mosques inside the Citadel were converted from churches originally built by the Byzantines.

In the 2012 war the gate was destroyed again, but the citadel-citadel remained untouched, so its image is a symbol of resistance and survival of the city's inhabitants, who had a busy and troubled history, full of tragic events.

Not only the crusades, the Ottoman conquests, but also a devastating earthquake hit the city in 1138, one of the most destructive in known history.

His icons are not only "bridges" to ineffable areas of feeling, but also art of memory. 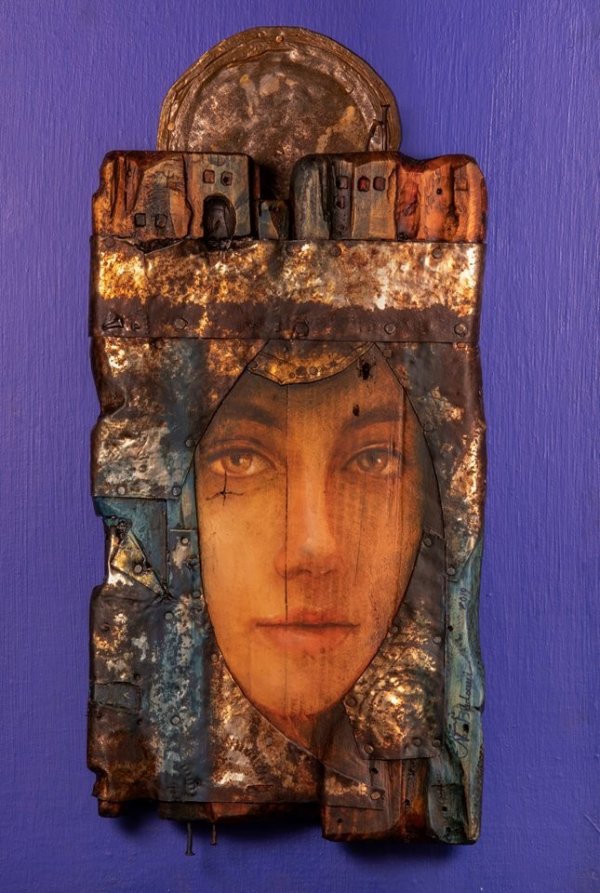 This is exactly the touchstone of contemporaries who seek to cultivate amnesia, who want only the present moment. The icons, understood in a broader sense, not only strictly religious, are the counterweight of the work of fragmentation, dissolution, disruption and disaggregation of previous guide marks which is the specifically postmodern. For years, I have been studying the differences in "chronology", but also cultural cosmology between West and East, and I discover that the deconstructivist spirit, which has something of the fury of the original iconoclasm, opposes not only the traditional spirit but also any attempt of the soul to preserve and cherish it. Any attachment could make it difficult the transit from one state of aggregation to another or to collapse in a surface zone where the mind cooks, creates and dissolves "reality" upon its will.

Icons do not let beauty dissipate, they are, among other things, reservoirs of a secret memory that prevents radical separations or ruptures, they always save what seems to have been doomed.

What can an artist do who is forced to rebuild his world from shards and ruins? a world so fragile and easy to demolish "overnight"?

Icons are a piece of resistance to any devastating rage, be it culturally or politically orchestrated.

I must say that, among other things, Nimat restores churches and art pieces demolished by bombings. He is both a painter and a sculptor.

This stubbornness to preserve, restore and save the "memory" of a city of countless concrete or impalpable dangers or various forms of repression, in the harshest and most precarious conditions seems an absurd gesture in a place where peace has always been a ephemeris or a fragile state of equilibrium.

The way in which artists oppose social oppression and war, but also censorship or various cultural taboos - I am now thinking of Klimt's group in Vienna or the Dada movement - makes almost any artistic discourse subversive and has, as well, the role of to undermine totalitarianisms, to preserve various threatened cultural elements and to tell the truth when the fact becomes problematic. 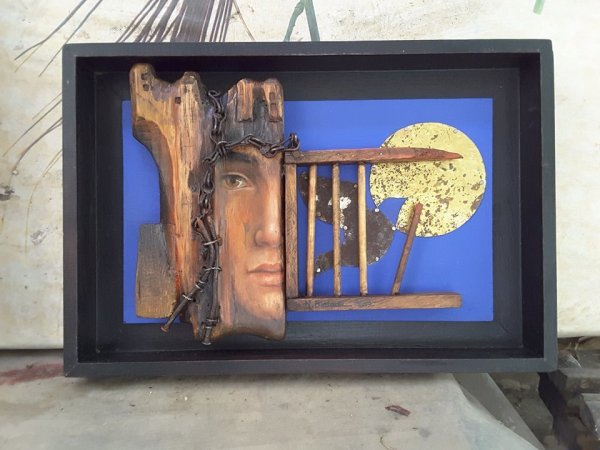 Nimat's icons are images of innocence suspended between walls, ruins and fortresses, a prisoner of war in a battle with which he has nothing to do.

The intimate being is not intellectual, it moves on a different orbit than the one offered by the material reality, it believes, hopes, invokes the impossible, it cannot get rid of fantasies.

Sometimes we have the chance to be born in the right city, other times we are wonderers, looking for it. The ghost towns within us call us by name, we have to live there, no matter what, even if, being there, concretely, we would feel just as far from the inner city.

In each of the great metropolises, loneliness has a different taste. It doesn't always crush you. Sometimes the breath of the city can be captured in gestures and ritual acts. Every street has its own story to tell, every house carries, beyond the walls, the secret of certain destinies. The shadows of the big metropolis record everything lived. A neighborhood movie theater, an old tree, a weeded fence, all have something to say about the joy or sadness, the commotion with which people frequented them and touched them.

A city is a resonance board, but also one that memorizes. It's a crucible in which time mixes. Not the geometry of the streets, not the charm of the decay of the old buildings from the city center, not the ruins, not the specific forms of the place, but the steam of life contained in them is what makes the music. In the morning, noon and dusk, the world falls apart for half an hour, becomes immaterial, transparent and the soul of the places becomes more present. A fog of moods and thoughts, of rumors, an amalgam in which all mix together: the screams of birds, the chirping of children, the roar of cars, the roar of horses, the sound of footsteps, the sound of whispers and laughter, the smell of warm bread, the scent of gardens, the scent of gardens, it rises into the air, penetrates the lungs, then dissipates. We breathe the soul of the city.

I thought about which of Marco Polo's imaginary cities in Italo Calvino's book I associate Aleppo with, as I feel the city from Nimat's icons, but also from other works. I feel like saying, "Zaira." 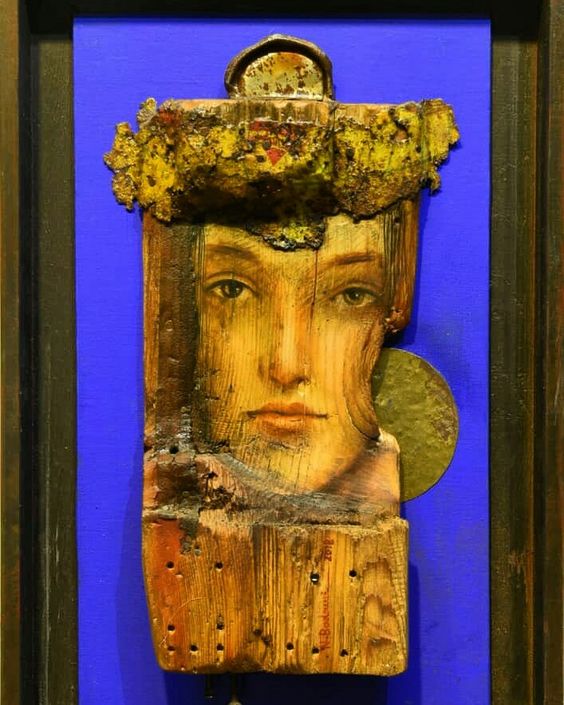 "In vain, most merciful Kubilai, I will try to describe Zaira, the one with high bastions! I could tell you how many steps the streets that go down the stairs are made of, what kind of vaults the arches of the porticos have, what zinc sheets the roofs are covered with, but I already know that it would be like not telling you anything. This is not what the fortress is made of, but the connections between the measures of space and the events of the past: the height at which a lantern was placed and the distance from the ground to the hanging legs of a hanged usurper; the thread stretched from the lantern to the front railing and the garlands that accompany the queen's bridal procession; the height of that railing and the leap of the lover who passes over it at dawn; the inclination of a trough and the solemn gait of a cat passing through it, slipping through the window; the firing distance of the gunboat that suddenly appeared from the coast and the cannonball that destroys the gutter; the breaking of the fishing nets and the three old men who, sitting on the pier to patch the nets, tell each other the story of the usurper's gunner, who is said to have been a flower child of the queen, left in diapers there, on the pier. With this wave, aroused by memories, the city is impregnated like a sponge and expands. A description of Zaire, as it is today, should encompass the whole of Zaire's past. But the city does not tell its past, but contains it, like palm lines, inscribed in street corners, window grilles, stair railings, lightning rods, flag lances, each fragment in turn furrowed with scratches , serrated cuts, scratches, cannon shots. " (Italo Calvino, The Invisible Cities).

Note: Nimat Badawi, born in 1965, holds a degree in Fine Arts in Painting from the University of Aleppo, studied Byzantine icons and restorations in Rome, is a Founder and art instructor at the Rolan Khouri Art Institute and a specialist in art restoration. He participated in numerous international exhibitions in Syria, the Middle East, Europe and the United States and has done mural painting of the Dome of the Syrian Catholic Cathedral in Aleppo.